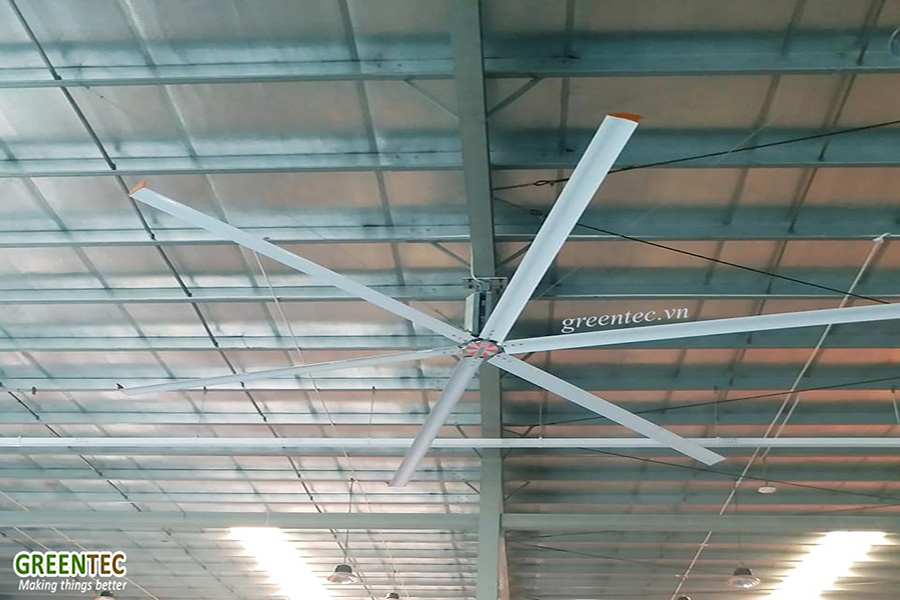 Posted at 02:47h in Uncategorized by Greentec Sigma

Industrial fan with high speed, can cool effectively in large spaces or crowded places, suitable for use in bars, restaurants, warehouses, factories …

What are industrial fans?

Industrial fans are compact fans designed with a large capacity motor and large blade size to provide the ability to draw air in and out of the air with high speed and pressure. Therefore, industrial fans are often used in large, crowded areas to provide efficient circulation, ventilation, cooling and cooling.

Electric fans used in industry are usually classified as follows:

Has the effect of circulating the air, eliminating toxic gases, smoke, smoke, dirt, heat radiation … and bringing fresh, oxygen-rich air from the outside to the inside. These types of industrial fans have the task of ventilation, exhaust ventilation is essentially a exhaust fan, large capacity ventilation fan. (See also: Why use industrial exhaust fans for workshops?)

It has a cooling effect thanks to the electric current that rotates the blades to create airflow towards the user, dispelling the hot air around the body to make room for fresh air to enter. These types of cooling fans have a variety of designs such as low-floor industrial fans and vertical industrial fans for direct placement on the floor, wall mounted industrial fans for wall and fan mounting. industrial trolleys with low height like floor fans but fitted with a wheel system for easy moving. The main types of industrial cooling fans are tree fans, wall fans … large capacity.

Also known as an air blower, mainly used to diffuse the air in aquaculture, wastewater treatment …

Industrial fans have advantages and disadvantages? When to use it?

Industrial fans have the advantage of a solid design, large wingspan, large capacity so it can meet the needs of cooling, ventilation on a large area or for crowded areas, can be replaced for many fans. Small to save cost. Industrial fans also often have greater durability than civil fans so they can be used for long.

When to use industrial fans

With the above characteristics, industrial fans are suitable and should be used in large spaces or crowded with people such as bars, restaurants, factories, warehouses, farms, basements, tunnels, apartments … more is a normal home use with not too big room area and not too many members.

What industrial fan should buy?

To buy good industrial fans, users should note a few points as follows:

Choose fan capacity, wind speed, ventilation speed … suitable for the area of ​​use and the number of people to serve.

Industrial fan blades should be chosen with wide span span but not too wide width to increase rotation speed and cooling ability and should be made from high-quality materials to ensure long-term durability.

Priority should be given to fan models with features that regulate wind speed, timer … and a remote control to enhance the usability.

Attention should be paid to the space used to select fans with noise within the permissible range, avoiding types of noise that are too loud that will affect learning, living, working …

Choose a fan with a rugged design to prevent vibration when operating, made from good materials and safe for health.

How to use industrial fans properly?

To ensure the performance and durability of industrial fans, users should note the following:

Choose a suitable installation location or fan position to ensure a stable and safe fan for people around you.

Installation in accordance with technical requirements, if it is a ventilation fan, exhaust fan or industrial air blower, it is advisable to design advice before installation.

Regularly check, clean, maintain and maintain the fan to operate effectively, not to make noise, not to cause unfortunate incidents due to electrical leakage or damaged components and components.

What are HVLS industrial ceiling fans?

HVLS industrial ceiling fans operate on the principle of cool air movement breaking the moisture-saturated boundary around the body and increasing the evaporation rate to create a cooling effect. HVLS industrial ceiling fans create an air column as they rotate. This column of air moves down and along the floor. This horizontal airflow is related to the diameter of the fan and, to a lesser extent, the fan speed.

In ideal conditions, a fan with a diameter of 2.4 m creates a deep airflow of about 0.91 m. A 7.3 m diameter fan creates a 2.7m deep airflow, high enough to submerge a person standing on the floor or a cow, its original development purpose.

Commercial HVLS industrial ceiling fans differ from residential ceiling fans in regards to diameter, rotational speed and performance. While some fans use modern propellers to move the air, other methods are being used to make it more efficient like using airplanes.

Air movement can have a significant effect on human thermal comfort. Cold winds in cold conditions are considered unfavorable, but air movement in neutral to warm environments is considered beneficial. This is because usually in conditions with an air temperature above 24 ° C, the body needs heat loss to maintain a constant internal temperature.

Unlike air conditioner, cool room, cooling fan. Ceiling fans increase air velocity at the user level, enabling more efficient heat removal, cooling of occupants, instead of space. The increased air velocity increases the rate of convection heat loss and evaporation from the body, thus making occupants feel cooler without changing the dry bulb temperature of the air.
Hot air is less dense than cold air, causing the hot air to naturally rise to the ceiling through a process called convection. In still air, the layers have a constant temperature, the coldest at the bottom and the warmest at the top. This is called stratification. The most effective and effective way of mixing air in a stratified space is to push hot air down to occupancy. This allows complete mixing of air in the space while reducing both heat loss through walls and roofs, and energy consumption of buildings.

Due to the large diameter and the specially designed industrial hvls ceiling fan, only one HVLS industrial ceiling fan is needed to create a balanced and comfortable airflow in large industrial spaces, compared to 34 industrial fans to have same results