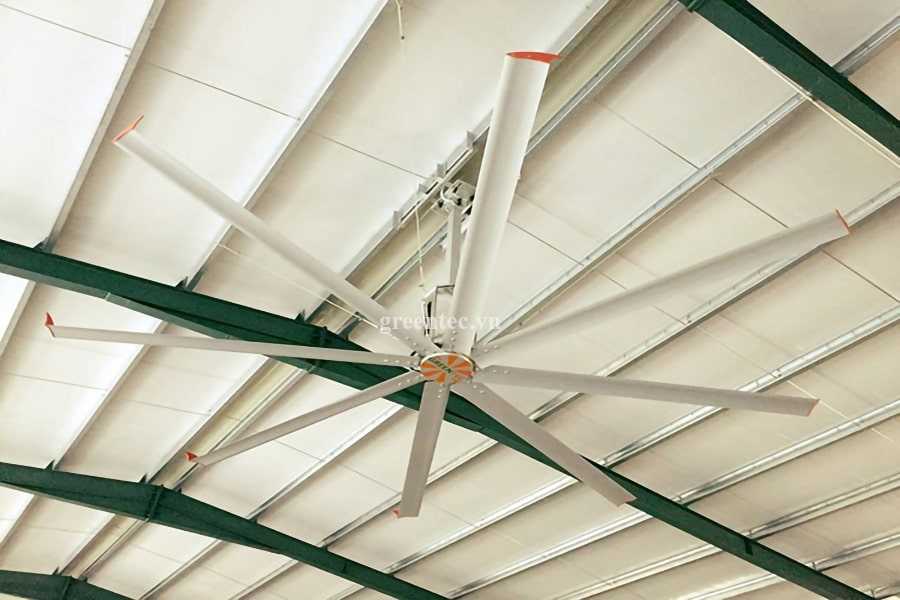 Posted at 02:51h in Uncategorized by Greentec Company

Principle of operation of the HVLS Fans

HVLS fans operate under cool moving air principles that break the saturated boundary layer around the body and increase the evaporation rate to create a cooling effect. HVLS ceiling fans create an air column when they rotate. This air column moves down and along the floor. This horizontal airflow is related to the diameter of the fan and to a lesser extent the fan speed.
Ideally, an 8-foot (2.4 m) fan creates a floor air flow of about 36 inches (910 mm) deep. A 24-foot fan (7.3 m) creates a floor air of 108 inches (2,700 mm) deep, high enough to submerge a person standing on the floor or a cow, the original purpose of development. it.
Commercial HVLS fans are different from residential ceiling fans related to diameter, rotational speed and performance. While some fans use modern rotors to move the air, other methods are being used to make it more efficient than using airplanes.

Air movement can have a significant effect on human thermal comfort. Cold winds in cold conditions are considered unfavorable, but moving air in neutral to warm environments is considered beneficial. This is because normally in conditions of an air temperature of about 74 ° F, the body needs to lose heat to maintain a constant internal temperature.
Unlike air conditioning, cool rooms, cooling fans. Ceiling fans increase air speed at the user level, enabling more efficient heat removal, cooling for occupants, instead of space. The increased air velocity increases the rate of convection heat loss and evaporation from the body, thus making the occupants feel cooler without changing the dry bulb temperature of the air.
Hot air is less dense than cold air, causing natural hot air to rise to the ceiling through a process called convection. In the static atmosphere, the coldest, coldest layers at the bottom and the warmest at the top. This is called stratification. The most effective and efficient air mixing in a stratified space is to push the hot air down to the level of occupancy. This allows complete mixing of air in space while reducing both heat loss through walls and roofs, and energy consumption of buildings. In order to avoid causing a draft, the fan should be running slowly so that the air speed at the level does not exceed 40 feet per minute (12 m / min).